There are stories in everything. And everyone. I’d like to share with you my series of ‘personal narrative’ writing on Stories of Geelong writer and journalist Mari Nilssen

Last year, I met Mari. We were sitting in a ‘short stories’ class by Deakin professor and author Micheal Meehan. Turns out we were both literature nerds; both journeying the two hour public transport journey from Geelong to Deakin University’s Burwood campus.

Writers are weird people. We really are. When we meet fellow writers, we can’t help but feel insecure. All of a sudden,  we’re not the only obsessed and passionate writer we know. All of a sudden we have to share the title. In this way, when I first met Mari it was almost uncomfortable.

We were both postgraduate students obsessed with writing, we both wanted to change the world and we both believed writing – and reading – and dreaming big was the answer 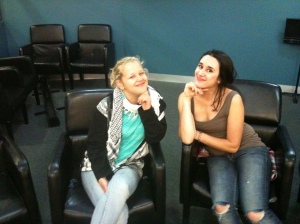 Writing is, by nature, a solitary process. It can be lonely. Just think of all the great novels, even the not so great novels, written over history.

Think about the process behind it, how writers accomplished prolific works (and edited and drafted these works!) of 100,000, 150,000 and up and up, thousands words.

Usually, they beat the sun and got up early – a cold time of day, even in summer, and wrote. And/or stayed up late and used the midnight hours to write, becoming a strange mix of exhausted and stimulated before hitting the pillow.

Or, they steal away at lunchtimes to write, sharing a bowl of soup with dog-eared notebook.

As with our generation of writers, one of the biggest battles we fight is that against distraction.  The resistence to “check Facebook,” ignoring Google unless for research purposes, turning your phone off or – better- hiding it in a temporary sneaky, unseen place.

And, it’s like this: you walk around and do life but the whole time you have this secret, unceasing voice in your head telling you, “Write, write, my goodness me, this is your life’s purpose: keep doing it!” Maybe, if you’re lucky, a crisp English accent echoing Churchill’s famous quote, “Never never never give up!”

And then of course you have the evil, pragmatic, mean-editor voice too (fostered by further study and editing classes) telling you, “Your work sucks!” Or, a milder yet slightly panicked version: “Don’t suck, ok!!?! Please, just don’t suck!”

So, yeah writers are weird types. On the outside, they’re normal people and work jobs and make awkward small talk (you know they’re observing you as potential ‘inspriation’) but on the inside, there’s this whole ocean of stuff going on as described above.

And then, when I met Mari, I felt she understood.And I understood her.

In the sense that, the way a soldier might feel about their country, we felt the same way about writing. Any competitiveness turned into comradery and we began our talks on “how to change the world.”

How do you change the world? How do you bring things to light? How do you tell the honest truth (double negative I know) , like our media does not always do? How do you speak up for those who have no voice? Which battles do we fight?

Such questions, such questions Mari and I began to discuss. I saw ideas shooting out her head, as well as my own. There’s more to tell on Mari.