Today, on a mildly cold day in mid May (yes I like alliteration) I ventured to the Spa Region or, as I secretly think of it – one of the prettiest places in Victoria, Australia maybe even the World. (Secret’s out now.)

Where am I talking about? Bermuda? Paris? that charming little Italian village you like? Yes all these places are great but can they really beat Hepburn Springs/Daylesford area? Probably they can and likely I have – if you wanted to do a comparative study using Lonely Planet books, tourist statistics and photos at sunset – a weak arguement but still – but still, I don’t care. (And I hope you don’t terribly mind either.)

Because, Hepburn Springs/Daylesford is jut so beautiful. It really is. Words are cheap and unfortunately  I don’t have any photos to belay what I’m talking about so you’ll just have to look at the “picture” I’m going to attempt to paint, using no more than words in the English language, my tired but faithful old Macbook and good intentions.

Suddenly suburbia turns green, all 100 or 80 km/h roads and acres of green Aussie bush, uninterrupted except for the one pathetic scary half eaten by birds (hardly feared) and of course, the entrance to Fairy  Park. (Sigh! Tempting to just stop off here and hang out) 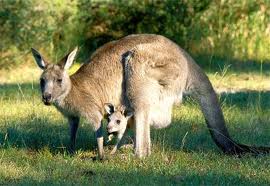 Not much happening except for the odd under-driving ute or car doing thirty km/h below the speed limit. Wait for corner to become straight before overtaking. Sing along to Cat Stevens/Chris Issak. About a CD and a half later and a couple of modest signs advertising potatoes, chestnuts, firewood and

of course “horse manure” and you’re there: Daylesford. Vincent Street, the main strip where it’s all happening.

… Sorry, wrong image! I forgot to turn off my Time Machine (and obviously my Bad Joke Machine too!) Anyway, if you’re interested, the street looks something like this … except in Real Life (and probably even Fake too) it looks – and IS – much better. And also, this photo was probably taken at 6am in the morning… before People started to emerge. Because, you see, on a Saturday morning in Daylesford, there are a lot of People around… There’s that kind of Buzz atmosphere, full of people walking six poodles at once, or people bushwalking rewarding themselves with a latte or just curious Melbourne folk who want to peek around the charming old town.

Follow me from the main street and we’ll go down to the beautiful Boathouse Cafe, right near Jubilee Lake. This is a crazy, glamourous place where you’ll see both teams of ducks and gaggles of geese (aren’t collective nouns just the coolest thing around?!) and cups of Vittoria coffee laid next to weekend newspapers all in the one space. Well, around the place anywhere. Here you’ll find a cosy little lake, neat little walking track and paddle bikes for hire. Except on this 9 degree Autumn day, the paddle bikes attendant was quite lonely.

In the carpark we encountered a Bosnian farmer selling his wares. Tomatoes, apples, figs and pomegranates. His hands were stained bright orange and his fingernails deliciously dirty with … (I’m guessing dirt, you too?) Friendly, shrewd and a local – this character and natural born salesman worked his charms and we walked away with a bulging plastic bag containing farm fresh produce for about $7.90. I tasted a fig before and nearly fainted with how good it was … Supermarkets, your “Fresh” produce does not even compare to farmers.‘ But I’ll still frequent you because I can’t find globalisation and I can hardly get through more than two pages of a Noam Chomsky book.

Anyway, sorry to digress – back to the trip. So after lunch, ducks, visiting the farmer, etc. It’s straight onto the Hepburn Bathhouse and Spa. Or just the mineral pools, as I think of them. It’s here where you float in warm (Goldilocks warm – not too hot nor too cold) pools, gazing out at the bright green bush of Hepburn Springs as you do so. As you enter the pool area, there’s just open windows and nothing to stop your view. At this time of year you see a million Autumn leaves strewn around the place, bendy trees, amazing gum trees and basically – you just marvel at the beauty of nature around you as you swim/float/or as the colloquial says ‘chillax.’ 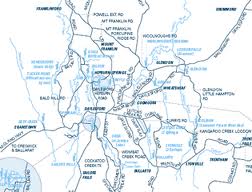 If I wanted to be cheesy, I’d tell you that at this point “time stops” or at least an hour or so does as you just relllaxxxxx. And it’s so peaceful and warm and like a big marshmallow consisting entirely of beautiful mineral water until a little kid – or a cheeky adult – ignores the suggested “steps” for entering the pool and just ‘bomb’ jumps in the water!! haha

Finally, you leave the pool, drink the free mineral water and use the lovely free “top quality” shampoos, etc. before exiting out of the car. Hair wet, autumn leaves dancing around you (millions and billions!) you get in the car and make the way home, passing charming little houses and lush green bushland on your way. This time, as you drive – having been wooed by the beauty of Hepburn Springs – you feel so much more relaxed. You just do. There’s no climatic cliff hanger ending here ... No, “And then we pulled over and I discovered that I’d accidentally taken home a treasure map or found a Tassie Tiger in the backseat or something.” Sorry, nothing like that – you just leave Hepburn Springs feeling relaxed. And for about 23 minutes you might consider selling everything and moving there because local residents get half price admission at the Hepburn Bathhouse and Spa.

After years of freelance writing and working in magazines I am now writing fiction and short stories. I'm a writer on a journey to becoming a published author. My genres are historical fiction for adults, YA and MG girls' stories, short stories and whatever else words come to me and ask to be written! View more posts